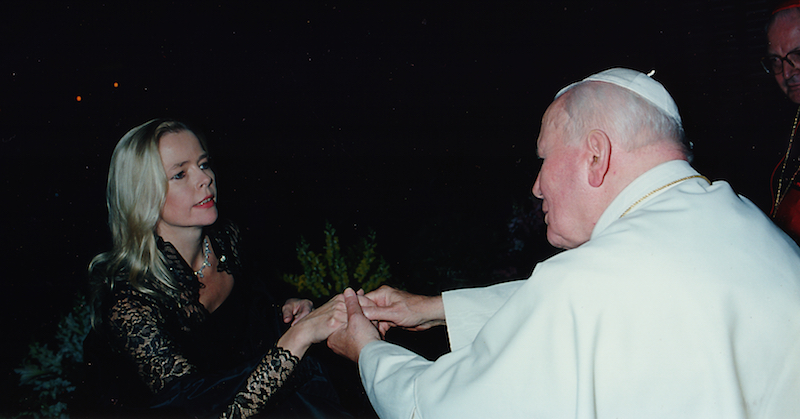 “Requiem a Roma” is a mass, written for choir, orchestra and three soloists.
The first performance took place in the Vatican, in the “Sala Nervi”, for the “International Day of Politics” in the presence of Pope John Paul II in November 2000 (the year of the Jubilee) in front of 6000 guests, including the former President of the Soviet Union Mikhail Gorbachev, with Gloria singing the soprano solo part of her own work.

Shortly after that, a further performance took place in Rome, in the Church of Sant’ Ignazio as a charity concert for the Salesian Order. The performance featured the Hamburg Symphony Orchestra conducted by Boguslaw Dawidow, the Poznan Cathedral Choir of Men and Boys, with soloists Nicolò Rigano (bass) and Gloria Bruni again singing the soprano solo-part of her own work.
“Requiem a Roma” was subsequently performed in Poland, Italy, Germany, Austria, Palestine, Israel and Belarus.
A CD recording of the Rome concert was released by BMG / ARTE NOVA.

Rosary Prayers
This site uses cookies to improve users' browsing experience and to collect information on how the site is used. By continuing to browse, you accept the use of cookies; otherwise you can leave the site. Ok!Privacy policy
Scroll to top